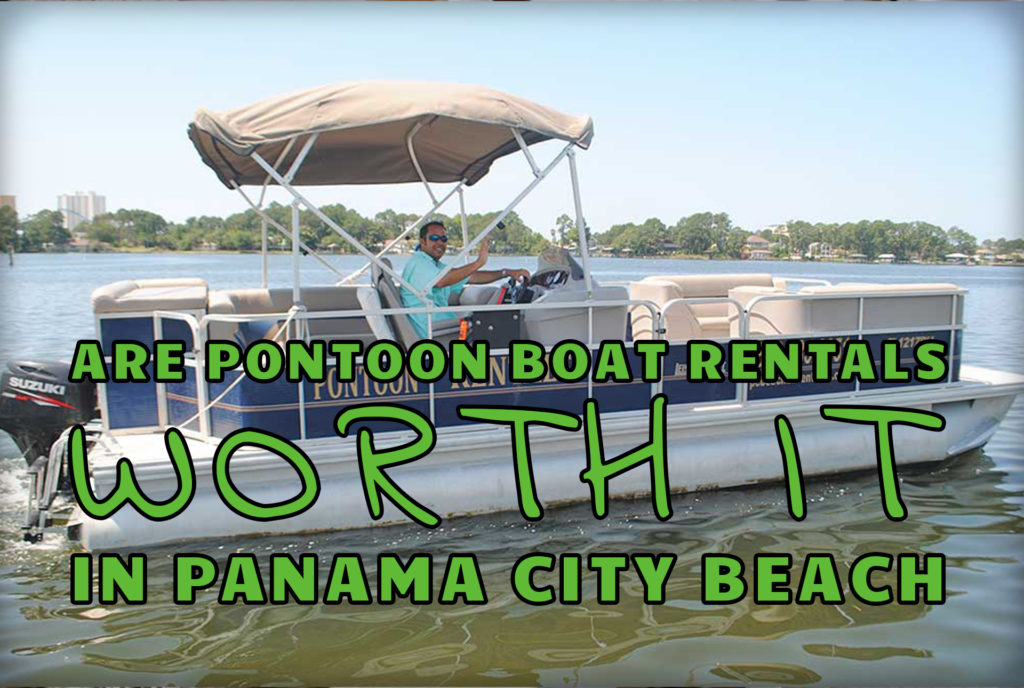 Are Pontoon Boat Rentals Worth it in Panama City Beach

For those of you looking to book a day trip to Panama City Beach and aren’t sure whether to just enjoy the beach or make things a bit more exciting with the pontoon boat rentals, this is the article for you! We’ll go into the pros and cons of these boats below!

Everything you need for a full day trip on the boatcan be found right at the marina. Fishing gear, safety equipment, guides on what to do, and much more is made easily available. This way, all you need is to setup a rental and to bring a cooler! Controlling it is easy as well, letting you jet around Panama City in no time!

Though we recommend you bookahead just in case, having a large amount of boat rentals allows for last minute plans to be a possibility! It also allows you to choose which of the boats you’d like to take out. This is especially the case if you vacation during the off-season.

The initial price of a pontoon rental may make you think this would be a con, but if you consider all the opportunities you can take in a single day, then its well worth it. For example, you can go to Shell Island, swim with dolphins, catch fish, and jet along the coast in the same boat. Imagine the combined costs of all those activities compared to the single cost of renting out one of the pontoons.

Shell Island is one of the most beautiful places in all of Panama City Beach. It has shores covered in shells and sand dollars, and the only development there is the single marina. Going during off season means you would have the island almost entirely to yourselves, getting your own private beach next to the Emerald water. Pontoons allow you to arrive and leave whenever you want, as well as allow you to pack anything you want conveniently.

Panama City Beach is well known as one of the best spots to interact with dolphins. This is because the dolphins here live in their native habitat, allowing for a completely unique experience with each encounter. This makes Panama City different than places like Orlando or Miami where the dolphins are trained to do the exact same thing in the exact same place with every guest.

Panama City Beach has been incredibly careful to preserve and encourage both artificial and natural reefs in the area. This has resulted in a blooming and beautifully diverse fish population. Fishing is also available year-round with fish ranging from deep sea trophy to the smaller coastal ones. Pontoons allow you to get to the best spots around Panama City and spend all day out on the water!

Since you’re limited to whatever water the marinais based in, chances are you’ll only be exploring the Gulf with your rental and not any lakes. The reason why this is a con is that having a pontoon boat out on a lake is way different than around Panama City. First, you won’t be able to catch certain fish species that can only be found within a lake. Also, Lake pontoons tend to be more relaxing, since you can’t jet along if you wanted. However, there also tends to be less space to travel due to it being contained to the size of the lake. If you’re looking to bring one of these boats out onto a lake, then it wouldn’t be worth it in Panama City Beach.

-Commitment to the Gulf

If you decide to check out the pontoon boat rentals, you are going to be out on the water for a while. If you’re the type of person who isn’t fond of that idea, then it may not be worth renting pontoons in Panama City. However, there are some places that allow you to book for 4 hours or 8 hours at a time. You could also always stop somewhere like Shell Island to take a break.

As you can see, there aren’t very many cons to pontoon boat rentals. The cons that do exist are understandable, but generally have positive buffers that make them not too bad. If you decide against renting one of the pontoons, that’s okay! If you do rent, we’ll see you out in the Gulf!